The Center for Advanced Studies on Consumption and Communication (Ces.Co.Com) was established in 2013 to analyse and promote the culture of sustainability and responsible consumption, new media, social and environmental communication and cooperation, participatory processes, urban regeneration and social innovation. It tackles urban and peri-urban agriculture from a consumer’s perspective, highlighting public participation as a key factor for this emerging economic opportunity.

Ces.co.com is part of the Department of Sociology and Economic Law of the University of Bologna, which is a public entity. It supports the Municipality of Bologna in its sustainable and responsible consumption plans with studies, research projects, monitoring, social and environmental impact assessments.

Ces.Co.Com has 3 main areas of activity: research projects, higher education programmes and advice to the Municipality of Bologna and other stakeholders in the implementation of actions related to sustainability and responsible consumption, new media, social and environmental communication and cooperation, participatory processes, urban regeneration and social innovation. As far as urban and peri-urban agriculture is concerned, Ces.Co.Com investigates the relation between organic values and alternative food networks, for instance in terms of trust in organic farming practices and trust building among the members of Community Supported Agriculture groupings and alternative food networks. Ces.Co.Com also offers a University Master in “Enogastronomy and hospitality” as well as a permanent course in “Social farming” to support these growing sectors, in partnership with local and regional authorities.

The topics investigated by Ces.Co.Com are quite new and innovative. Innovation is also in the inter- disciplinary approach adopted by Ces.Co.Com and based on collaborations with experts from other national and international scientific fields. Ces.Co.Com has a strong influence on public authorities’ decisions. For instance, it contributed to the Urban Innovation Plan of the Municipality of Bologna, advocating for an integrated management of local, regional and national funds for urban regeneration

Ces.Co.Com approach to research is replicable in other territories, in accordance with universities’ organisation and rules. The Center is carrying out several citizen participation actions in collaboration with the Municipality and academics, but not on urban and peri-urban agriculture related topics yet, which they are expecting to develop in the future. 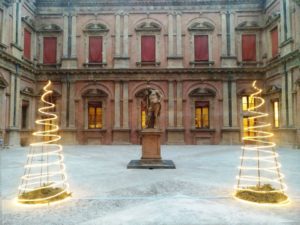