In 2016, the Municipality of Tirana launched the Plan “Go Tirana 2016-2026 Smart City”, which includes the rehabilitation of clear cut and degraded forests in the the Green Belt of Tirana through the planting of 50 hectares of fruit trees. The Green Belt of Tirana covers an area of 40,000 hectares and is inhabited and/or visited by roughly 1 million people annually. The plantation of a continuous belt of fruit and decorative trees is planned to expand the green surface around the city and ensure territorial cohesion.

The project is implemented by Tirana Parks and Recreation Agency.

The project involves the planting of shrubs and fruit trees to control soil erosion, steep slope works, and reinforcements with concrete belts and panels with stones in gabion. To increase the green surface, the Municipality is also financing the plantation of fruit trees in private gardens of houses that have recently been built in the area, in agreement with inhabitants. The project started in 2016 in the area of Farkë, a recently urbanised area on the outskirts of Tirana.

This project is innovative as it rehabilitates and maintains a green area that is subject to illegal dwelling. By involving existing dwellings, the Municipality shows its will to keep the integrity of the area, to reduce the fragmentation of green space and to protect recreational parks in Tirana. The project is in the first stage of implementation: it started in December 2016.

The main obstacle faced by the project was to reach a common agreement with all private owners regarding the surface to be planted, the type of fruit trees, etc. It was overcome thanks to the intervention and political will of the Municipality of Tirana. In the future, the area will be provided with new recreational infrastructure for the population of Tirana. 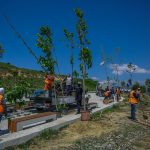 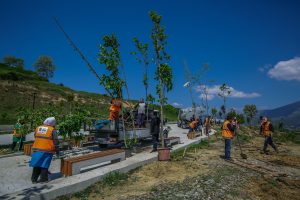